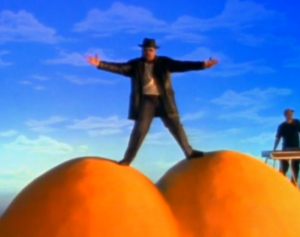 You might think by the title that this would just be about vanity.

Something that would be nice to have, but hey, you’ve got things to do, and besides, that sort of thing takes too much time, way too much focus on yourself, and the payoff is strictly what gets seen in the mirror.

BTW, this is a post about glutes, so the Sir-Mix-A-Lot reference was mandatory.

Glute training not only is one of the most effective ways to boost your metabolism, the posture and muscular benefits will take years off your appearance, and you’ll move like a younger (read: more athletic) person as well

Let’s talk about the work. It doesn’t take a huge chunk out of your day.

It doesn’t take a bazillian reps with no weight and super-precise-tiny movements coached by a soft-spoken Anusara yoga aficionado instructor (and only THEY have to key to getting your deep muscles firing!)

I’ve seen stuff like that and I just want to stop them and say to their client that this is the most expensive fifty calories you’re ever going to burn in an hour long workout and to go buy a kettlebell or a proper set of weights instead.

I forget who said this, but it bears repeating. If you want to succeed, keep it simple. If you want to make a lot of money off of people, sell an overly complicated program.

I want you guys to succeed, hence the lack of complexification.

But, enough of my rant. Let’s get moving.

One of our favorite one-two combinations is to work the glutes in isolation first by using a mini band before going into a leg/ hip movement.

This is important because we all sit too much and our butts tend to not fire along with the rest of the leg muscles.

Over time this can lead to knee and back problems, as well as a flat backside, and nobody wants that.

So, get those glutes firing first.

Then we follow up with a strength intensive leg/hip movement to get everything working together.

I’ve posted a number of workouts on this site. An easy way to put this into practice is to include a minute of mini band work before hitting one of the leg movements. So if you perform five rounds of a circuit and it includes swings, squats or lunges, include a minute band work in each of those rounds.