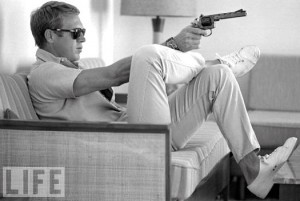 I grew up watching tough guy movies and for whatever reason, seeing actors who just seemed old and I mean old for decades, made me wonder: what happened? It’s like one day you’re Steve McQueen and the next day you fall apart, your warranty runs out and you’re Jason Robards. And if you’re really unlucky you end up like Ernest Borgnine. WTH? 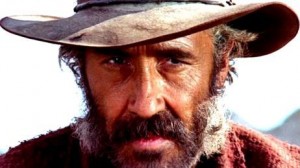 So, I decided that I would do whatever I could to stay more like Steve and put off falling apart and becoming Jason or Ernest as long as possible.

And that slide or decline is also a cultural narrative, one that says basically after age 18 or 25 (whenever you stop competing in sports and/or when you go into the workforce), your run is done. Hurry up and find someone and settle down before you start falling apart. By age 40 you should be decrepit. Aches and pains and feeling bad are normal. Should you try to not fall prey to “the natural order of things” you will be required to keep up with the following:

All of this would leave you too tired, sore, hungry, and unavailable (from the overwhelming time commitment) to face real life without huge amounts of caffeine and/or shaky shakes.

And this is also a big part of why we assume that anyone who does any strength work on a regular basis, especially if they succeed, is a shallow, awful, self-centered person. Look at how much time we think they have to spend on it, those vain bastards! 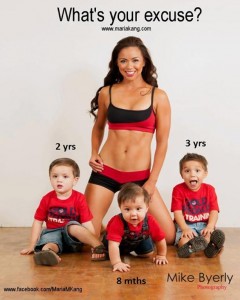 And not very far in the back of our heads, we look at that and think, “No way, even if it worked, would I want to keep that up!”

Sure, there are people out there who do all of the points above, who post videos about “How Badly Do You Want It?”, (which, for the record, I profoundly dislike), but most normal humans look at that picture of sacrifice and austerity and they do the math. And since a lot of people don’t have a huge margin of time or energy to begin with, they do the calculations and decide that no, they don’t “want it that badly”, and so either they don’t bother at all, or they continue with the one activity they zeroed in on whether it’s working or not. 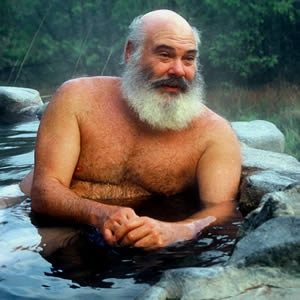 Too much moderation ain’t sexy.

And along those lines, there’s trying hard, but trying to do so within an idealized and impossible set of parameters in order to get back to where we were at some point in the past. (Usually it’s the senior year of high school for most people)

For a lot of people, especially women, this leads to looking for magical choreography training that “lengthens, tones, and lifts without building muscle”, along with way too much cardio. When someone pokes at a trouble spot they’re trying to “cardio off” I usually see cortisol and stress, not a lack of willpower. And like a lot of you, I tried that route as well and it took me a long time to learn what works and what doesn’t.

I fell into that one for years trying to get back to my 21 year old, college swimmer self, trying to find the right combination of swimming, running, and lifting, like there was this magical perfect balance out there that was constantly eluding me and if I found it then I could get my physique back to where it had been. And after a certain point, that goal wasn’t compelling enough, I wasn’t making progress, the training was boring (I was doing the basic machine based training I learned on swim team) and I fell into the good week/bad week cycle like a lot of people.

I am so much happier where I am now. You couldn’t pay me to go back.

This is not me relabeling or looking on the bright side of a bad situation. I’m a lot happier now with where I am, and a big part of why I’m sharing this is that I want to help more of my readers to get a point where you can map out and get after your goals from a healthy and empowered place, not the angst-ridden awfulness that passes as most fitness marketing.

And more than that, I want you to succeed.

Just to prove that I can back it up, I have posted two pics from sand volleyball. Why? Because while yes, the main motivation for most of us is to look good, it’s also about a lot more than what we see in the mirror or in photos, it’s about how we can bring out our best selves and be a better part of the tribe, and that’s something I believe passionately. 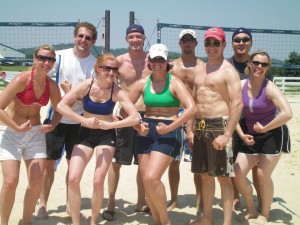 That’s me in the Reds cap and the aviators, and then seated, center. I look like this year round on three 60 minute lifting sessions and usually one 30 minute (including the walk to and from the park) sprint session per week. Sometimes two. That’s about four hours and change per week. Yes, I walk the dog a few times per week and stay active doing fun things, but about four hours per week is the extent of my structured training. You can achieve a lot more in a lot less time than you think is necessary by doing a few things that have the most benefit. That’s something else I believe passionately and that’s why I train my clients the way that I do.

Being strong, fit, and having kept up with some basics of athleticism lets me stay active without worrying or feeling fragile. I love still being able to dive for digs and saves in sand volleyball and being able to easily take highfalls in aikido.

It gives me the opportunity to connect with friends and have fun. And while being fit is a confidence builder, it also helps me to be more present and to take my attention off of myself because I’m not worried about what I look like.

But when I say I’m not worried about my appearance, it’s not in a I-gave-up-and-wear-mismatched-clothes-and-no-longer-pluck-weird-hairs kind of way.

I suspect if that was the case, then you would have been out of here a while ago.

So, over the next few posts, I’m going to cover a few bases:

Getting Started: A few basics to get the ball rolling

Why prioritize strength and movement? Why not just cardio?

Mindset and self talk – ideas and simple practices

The power of habit

I hope you’ll check them all out.

If you want to do start taking action, then you are invited to try a month of my classes, up to three times per week, for $50 and experience all of this first hand.

Yeah, but you’re a trainer, which means you’re a weirdo, so I have a hard time believing that you are telling the the truth! You’re lying!

Au Contraire, Mon Frere! Check out this testimonial from one of my regulars, who, by they way, typically only trains twice per week.

That’s a great offer. Check out a month of my classes for $50. It’s cheaper than a Starbucks habit. And a lot better for you.