One of the things that I’m thankful for is that I got to learn a couple of different approaches to training at the same time. Those being more traditional strength and conditioning and also Pilates.

Long story. My shift would end at the gym and an attractive women would come in to teach a class in the studio. I had time before my first class at school, and, well, you get the picture.

Not necessarily. The way it’s typically taught, yes, especially filtered through snooty people seemingly above such pedestrian things as hard training and muscle, but not necessarily.

The mistake I see people make with these systems is two-fold. They rely too much on using “energy” in an undefined way and without trying to contract their muscles. (Often they’re told to not use muscle except for their abs)

The other is to assume that these systems have secret movements that outsmart the laws of physiology and thermodynamics that allow someone to achieve a great physique without any hard effort.

If you compare Joseph Pilates’ work and looked at that in the context of other physical culture figures of the early 20th Century, then his system starts to make more sense. Honestly, looking at old footage of him teaching makes me think that he’d get fired from most Pilates studios of today.

Without that connection to physical culture, it’s like if Elvis never met Johnny Cash – it’s okay, but there’s not much of a point to it.

There were a number of similar figures at the time from Maxick to Edwin Checkley just to name two, who like Pilates started off with poor health, but through deliberate and systematic training overcame that obstacle and achieved seemingly superhuman strength. 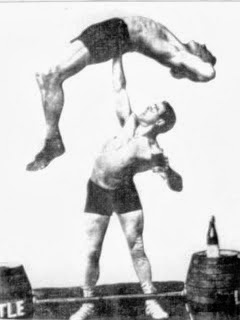 And, just in case you thought that was just for the guys and way back in the misty past of the 1900’s, here’s a picture of “Pudgy” Stockton from the 1950’s holding her husband overhead.

Back to the subject at hand. There were a lot of recurring themes across these training systems, and since success leaves clues, it makes sense to take a quick look:

Picture a body builder practicing their posing routine while contracting their muscles. Or Bruce Lee actively flexing his muscles while going through empty handed martial arts movements. There’s actually a fair amount of effort going on. That’s what Maxick, Checkley, Pilates, and others at the time were doing in the context of their methods of training. That was also applied to free gymnastics, light dumbbell and Indian club training.

They also didn’t look at their particular training system as an end in and of itself. The point was to open up options for more intense strength work and greater athleticism as evidenced by their physiques and feats of strength.

This was not limited to a few outliers. There was a culture around training, it wasn’t just a solitary practice. And again, in the applying those principles of tension, athleticism, and controlled movement, things like free gymnastics also make more sense.

While I appreciate those lessons and I apply some of them to conventional training, there are only so many hours in the day. Those systems can often become distractions, there aren’t clear metrics to know if you’re improving or not, and they tend to end up relying more upon old stories and tall tales of their founders rather than consistent results and straight forward logic.

Plus, in the pursuit of Pilates girl, I took a few yoga classes with her. Looking around, I knew that this was not the direction I wanted to go. The “woo woo” factor was adding up too fast. There were a few stories in the popular fitness press at the time “Navy SEALs and football players are doing yoga and Pilates!”, but I didn’t see anyone remotely badass in these classes.

That lead to a simple insight and a rule that has prevented a lot of bad decisions and that I continue to live by to this day: If Steve McQueen wouldn’t train like this, then neither should I.

I would be remiss, however, to not share some practical applications.

It’s worth working on the mind/muscle connection and it doesn’t have to be complicated or time consuming. Everyone thinks it has to be this esoteric thing, but that’s really not necessary.

Here’s a video covering one of my favorite mobility routines using a staff. If you slow down the movements and get your muscles working while you move and stretch, then it really gives you a lot more bang for the buck. Five to ten reps of most of the movements is fine.

Routines like this can be used to help you not only get more mobile, but also improve the mind/muscle connection and that signal strength, which carries over into physical strength, athleticism, flexibility, and coordination.

There’s nothing overly special or secret about this or any other system. It’s basically looking at how the body moves, moving that way, and with some deliberate effort.

A common mistake is to try to present one method as the be-all-end-all answer to all training questions. Lift weights. Work on your conditioning. Practice moving in a deliberate way. It’s all important. Lean into your weaknesses, don’t just go with what you’re already good at or what comes naturally to you.

The doors are now open to my online training program. Email me at 513fit@gmail.com with your details to get started!